Architecture is not about space but about time. – Vito Acconel1

Transparency and sensations of weightlessness and flotation are central themes in modernity. In recent decades a new architectural imagery has emerged, which employs reflection, gradations of transparency, overlay and juxtaposition to create subtle and changing sensations of space, movement and light. This new sensibility promises an architecture that can turn the relative immateriality and weightlessness of recent technological construction into a positive experience of place and meaning. What we learn from Calvino and others has been well put by Kevin Lynch: “We live in a world, which is a temporal collage. The juxtaposition of old and new speaks of the passage of time.” The weakening of the experience of time in today’s environments has devastating mental effects. We have a mental need to experience the reality that we are rooted in the continuity of time, and in the man-made world it is the task of architecture to facilitate this experience — the superimposition of the old and the new. I. M. Pei’s controversial pyramid in the courtyard of the Louvre, Paris

While the effects of history, the residue of the passage of time, are not always intentional, they may be intentionally and selectively preserved in our minds, once they are in existence. Thus, giving us a “matrix” (of mental images) in which to locate our identity. The composition of the matrix is decided by our remembrance. The more varied memory we have, the greater the capacity for appreciation of diverse objects. We recognize their value and add them to the memory bank of our experiences. It might be argued that any thing, regardless of value may be remembered, but we realize that this will record only in the short-term memory and ultimately be lost. For a thing to be memorized, it has to be able to establish an association with the existing imagery in our minds. It need not correspond, but communication is necessary. This matrix perhaps comprises what we call tradition. The associations which we make within, (between or among) the objects of this mental matrix constitute the symbolic implications, which stubbornly remain the same for us regardless of whether the object ceases to exist physically or not. This tendency to ‘remain the same’ exists only as long as a very strong motive force doesn’t displace it from its associations, such as the death of a loved one, and its association with a particular object, say, a car and the subsequent inability to ride one. This shift of the object in the mental matrix can be temporary or permanent depending upon the strength of that force. Through all this, I am trying to emphasize that we are constantly involved in the superimposition of our mental landscape over the physical one. Australian Aborigines build relatively little—the visible built environment appears insignificant. Yet they have a very rich and complex cognitive environment.2 They live in an invisible landscape in the head, which is overlaid, as it were, over the natural visible landscape, overlapping, coinciding and being congruent with it at certain visible features. In this way the apparently barren and empty landscape is transformed cognitively, becoming endowed with extraordinary meaning, giving great temporal depth, and being humanized. None of this is visible to the outside observer for whom there is nothing there. This is the purest extreme of superimposition. We may not be living in cognitive landscapes of such intensity, yet we are unable to break from this tendency of the mind. Corroboree: An event where Australian Aborigines interact with the Dreamtime through dance, music and costume Each of us live in our own worlds. Yet, these are parallel worlds that share certain histories, elements and events, enabling us to communicate with each other. Sometimes we come across a person who doesn’t share these common histories with us, resulting in much misinterpretation of signals, language, and contexts—the comedy of errors. Our shared histories constitute the fixed points in our mental matrix.

When a new insertion in the environment is made, it needs to confirm more with our mental landscape than with the physical one. And yet it should make us secretly enjoy the mix of the new and the old in the physical environment, in order that it be willingly appropriated and appreciated. In this layering of successive insertions, when used as a deliberate device, we can then sense the depth of the matrix, creating an intrigue, an aesthetic experience. Greater meaning gets attached to the symbolic things, making us believe that time travels from moment to moment, memory to memory, rather than in a continuous flow. In this process we will lose some of the effects of history, and retain some, but at the same time create additional mental space for the future.

For the purposes of our experiment/s, consider a laboratory. The location is not important at the moment. But, a flexible environment. A room. An office. A tent. Dissolving walls. Shifting floors. Windows that “blink.” Doors that “yawn.” Doors like narrow slits; or tall portals. Lights: steady or flickering, bright or dark. Shifting lights. Color changes: from dark to grays to vivids. Wind, breeze, still air — air changes; fragrant room. Meditate, dance, laugh. Be still. Vacant or crowded, or in-between.

Metamorphosis as a function of the mind, not just the body of the room. Continuous, contagious—a room that you can dispose off, but an architecture that you carry, always. A custom, a matter-of-fact, like the language you speak, or the clothes you wear. Architecture for the “everyday-man.” A democracy in a room, just like the democracy in your wardrobe. A room to plan, to build, to put together—to involve oneself in space, and to achieve it. Change, renewal, metamorphosis — “the seventy-eight functions each room of an old house has served over the years,” now fulfilled in a new room — within a year, within one’s lifetime at a place. We are now imagining a room that doesn’t express itself through the usual terms such as door/ handle, stair/ exit, table/ chair, floor/ covering, roof/ wall/ ladder, but uses a different language: darkness/ light, soft/ hard, going-up/ going-down, in/ out, open/ shut — forcing a conscious awareness of the action that is being performed. Nothing is taken for granted or as definitive, everything is to be recreated, from objects to behaviors. This way an object remains inanimate until it is possible for it to create a kind of suspense,4 either by breaking down its function or some other way of resolving it, whereby it assumes new meanings which are also, at times, symbolic. We are looking at a room that is conducive to a physical and visual adventure which forces an intriguing symbiosis between work and user.

Architecture as a Function of Change:

y = y(x)
The statement: y is a function of x means that [ y ] varies according to whatever value [ x ] takes on. So,
Architecture = architecture(Change)

Is the architect more an artist or a craftsman? Is the problem that of the creation of the new or that of continuous adaptation? When machines, or electronics are outdated, they can be, and are, done away with ease. What of architectural products? We have used technology to make architecture lasting. We have always wanted our environments to last. 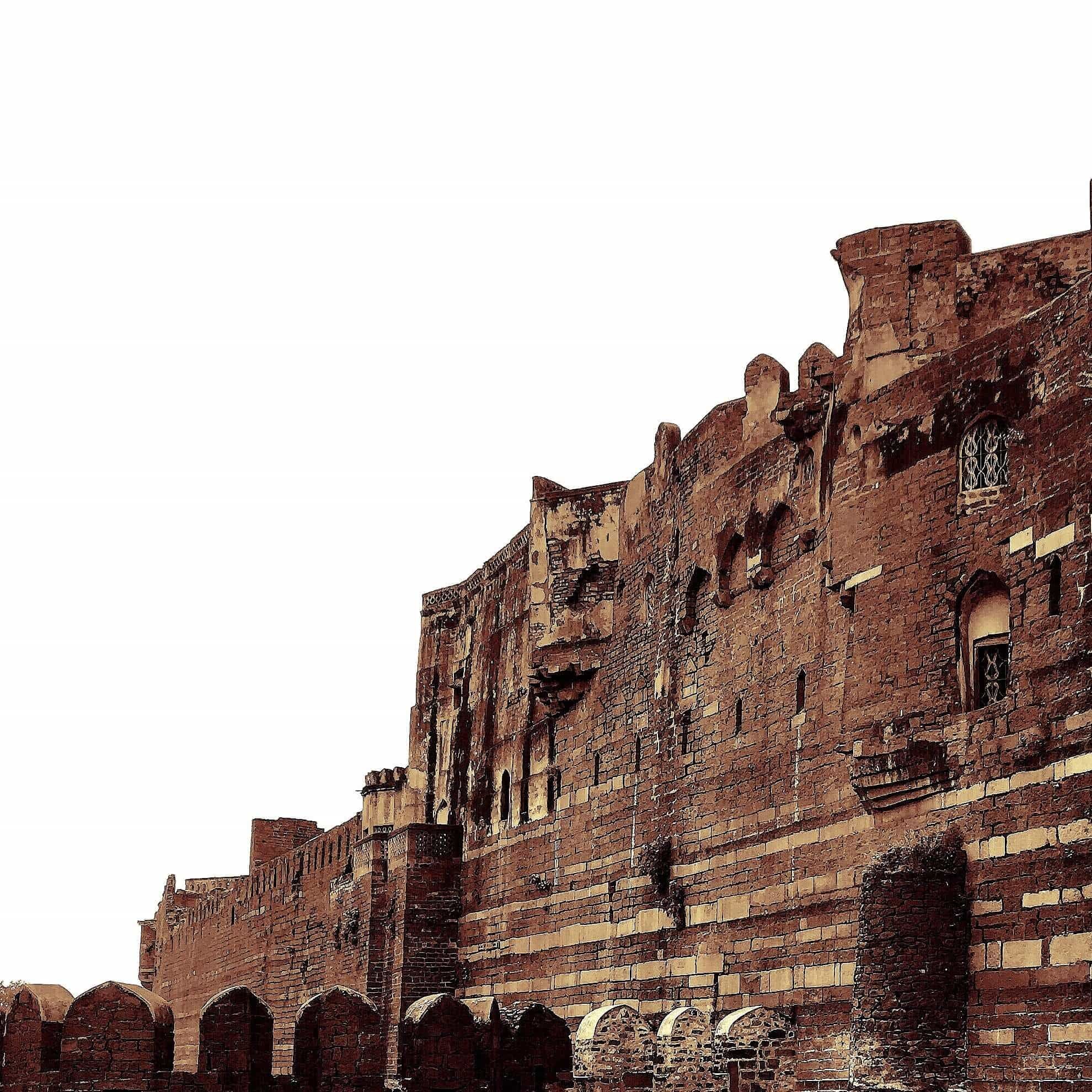 The Bidar Fort: An example of the Architecture of Permanence

Man’s longing for eternity has never died. In the past, it was the search for Elixir. Today’s developments in genetic engineering and cyberspace chase the same target (through the cyborg — cybernetic organism). And, if “change” is to be honored, Architecture of all of man’s endeavors seems to resist it. We dispose off the products of technology when a better alternative comes in sight, or when its purpose is served. Not so with architecture. Architecture, even today lacks flexibility. We still live within the rigidity of the pyramid. The Egyptians’ idea of immortality was embedded in their pyramids. They chose to resist the passage of time, and nature. All that remains now are the empty coffins and the plundered coffers. And as far as the French rationalist efforts (Boullee, et al) are concerned, here too there is no possible foundation for a claim to immortality, because such a claim’s only power can derive from the original forms (Egyptian) and concepts that it takes over. Monumentalization has failed. Can architecture be a monument to human endurance in this way? While the rest of human material efforts have turned to flexibility, adaptability and miniaturization for success, (or permanence), the stubbornness of the makers of buildings is amusing at the very least. Thoughts on Architectural Design
Latest posts Design as a Business Notes on Daniel Libeskind's Extension of the Berlin Museum with the Jewish Museum Addition How to Select a Topic for a Thesis Dissertation, or a Research Paper Fonting it Out 101 Books for Your Architectural Library Words of Creative Wisdom Thoughts on Architectural Design Architecture, Memory, and Time Digital Information Management for Designers: Part 2 Digital Information Management for Designers: Part 1
© Harshal Shinde. My words are mine. Except those which I have subconsciously sponged-off far cleverer people. All rights reserved. Contact